Herzberg referred to these two sets of factors as ‘Motivator factors’ and ‘Hygiene factors’ (summarised in the table below).

The first part of the theory, contrary to popular belief, was that ‘hygiene factors’ such as pay and benefits do not motivate staff at work. They can however, demotivate them. The second part of the theory was that there was no point focussing on the ‘motivator factors’ unless you had first ensured that an employee’s basic, hygiene needs were met. To invest resources in motivational strategies is a complete waste of time and money, in an environment where staff do not have their basic needs met already.

Far from becoming less relevant over the last 50 years, evidence to support Herzberg’s theory is increasingly obvious in a mode

world. In the dot.com world, people are increasingly applying their expertise for little or no monetary rewards:

Despite increasingly overwhelming evidence, many employers continue to ignore Herzberg’s guidance. In my own experience it still appears that when companies are faced with increased staff tu

-over they normally commission expensive remuneration benchmarking exercises and invariably increase base salaries. However, our exit interview research clearly shows us that money is not as important as many of us think. In a recent exit interview study, we found that only a relatively small percentage of exiting staff nominated remuneration as a reason for leaving and that this proportion was even lower for staff that had either been with the organisation for a particularly short or long period of time. 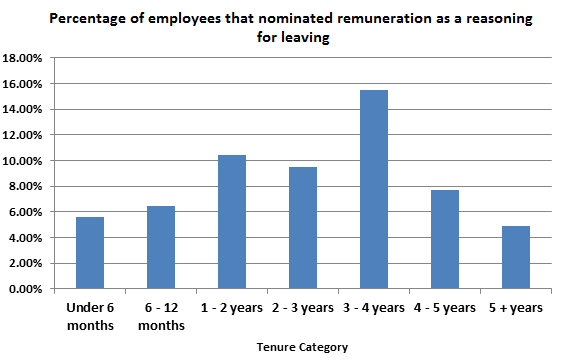 To further illustrate the point, I recently came across a great YouTube videocalled “Drive: The surprising truth about what motivates us”.  This video provides an interesting perspective on the subject of employee motivation and performance. Daniel Pink, the creator of the video, agrees with Herzberg’s theory on motivation:

According to Pink, monetary rewards don’t always work. Instead, he identifies 3 factors that lead to better performance and higher job satisfaction:

The finding that money isn’t the most important motivator will not be surprising to many well trained HR professionals. However, this continues to run in the face of common practice. As with many topics, sometimes the oldest insights are actually the best. Rather than search for the next management fad or buzz-word, many managers and HR professionals would be well advised to “brush up” on basic theories of motivation and ensure that these are applied with excellence.

Did you find this article interesting? What not share your story below or vote in our quick poll?